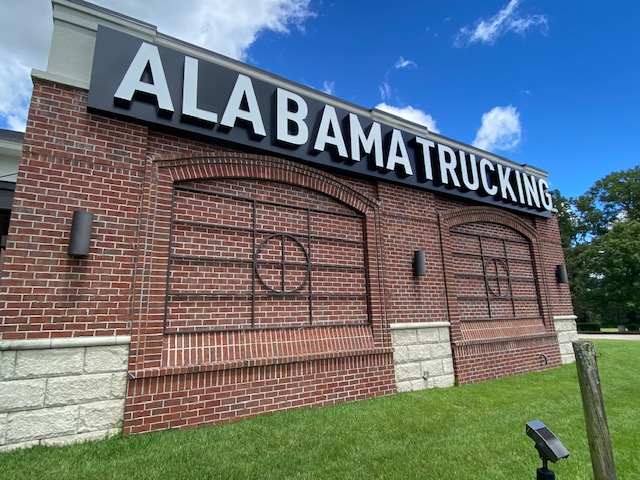 For the past two years Mark Colson has diligently traveled throughout his state - and the country, really - enthusiastically preaching the gospel of Alabama trucking.

And there is quite a story to tell.

Alabama is one of the nation's leading trucking states. The industry employs 112,000 workers in various capacities - 1 in 15 jobs in the state - yet lags far behind other industries when it comes to promoting itself.

The construction industry spends a little over $500,000 on a coordinated campaign to advertise job opportunities and drive people to training programs that get them in the industry. The Department of Corrections spends $750,000 on recruiting. Alabama trucking currently spends zero dollars on a coordinated effort to build its own workforce.

That is about to change.

"We're going to connect those dots," Colson said. "It's been a long time coming, but it's the thing we're staking a lot on.

"The thing that's challenging from us and the thing the people who are in the trucking industry in Alabama have to understand as they do this is it"s not an overnight fix. This is the hard work that so few people are doing. It's why when you sit around the table and everybody talks about the driver shortage and people just kind of shake their hands of it because it takes so much relationship building with the training programs and the instructors and the community partners, at the state level, at the local levels, with industry members all around the state. You just can't fix that overnight."

The industry leaders who invest their time, energy and financial resources to support the workforce development initiative will hold a special place in the program.

It"s such an ambitious undertaking Colson believes he"ll have to hire a full-time staff person to manage it.

"This initiative is everything," he continued. "I'm not saying we're going to get it right right out of the gate. We'll stumble, we'll find challenges, we'll need to call audibles, but we're not going to quit because if we're not doing it, I'm going to be sitting here five years from now talking about how we've got to get this going.

"I want to look back five and 10 years from now and go, 'Thank God we started that initiative.' We've got to start it. We don't have time to sit around a table and talk about it. We've just got to start trying in a strategic way and that's what we're doing."

Here are some excerpts from Wright Media's full interview with ATA president and CEO Mark Colson:

WM: Two years ago, you and I sat here both new at what we were doing. A lot has happened since then - COVID-19, an administration change in Washington, the infrastructure bill among them. Are you surprised with how much you've had to deal with since coming aboard?

MC: I knew and I learned really quickly this was a great organization that had broad support from the industry members and while we have inter-industry issues we have to work through from time to time everybody's on the same team. We're in the same jersey, we"re all playing different positions, but we're heading in the same direction and that's making Alabama trucking better.

WM: Would you say that makes Alabama a "trucking state"?

MC: We're a top 10 trucking state in America, by various metrics; we can pick out number of companies, number of employees, whatever. We're 112,000 employees in the state in the trucking industry; that's 1 in 15 jobs in our state.

We're not a subsidized industry so we don't get government incentives. Workforce development wise, we have to really kind of make it on our own. It's a story not even everybody in Alabama knows.

One of the things I've been able to do with support from our leaders is put us at the right tables, whether it's at the state government level, where you're talking about the Department of Commerce and the Workforce Council there, and in the Legislature and the Governor's Office we're well respected, we're treated well and the trucking industry is not always treated well around the country, especially up in the Northeast if you look at some of the actions being taken there by government leaders.

We don't have those mega-national carriers. A lot of those states have two, three, four really huge ones. We have a ton of whether it be 50 trucks to 2,000 trucks, and all the big folks operate here, but I'm talking about companies that call Alabama home and that's a story that just not everybody knows.

That's what makes us unique. We're not just dependent on two or three huge companies for our industry. It's a well-diversified network.

I preach the gospel of Alabama trucking to whoever will listen to me. I certainly do it as I travel the state. I want them to know in their districts they have a huge trucking presence, no matter where they're from. Professional truck drivers are the heartbeat of our industry, but the jobs are diverse, too, throughout the transportation and logistics sector.

WM: It appears freight is, pardon the pun, on the move again. What kind of growth have you seen within the organization during your term with the ATA?

MC: There's definitely been growth, especially from a business standpoint, if you look at some of the companies that have grown and continued to grow. There's been a lot of change, too. It seems to be an evolution where you've seen some companies in Alabama be bought by companies from out of state but maintain their presence (AAA Cooper/Knight-Swift) and you've seen a lot of Alabama companies buying companies all around the country (P&S Transportation). That is typically how the growth is now occurring in trucking, through acquisition.

I look at our membership numbers and it's steady and strong. I don't have any specific metrics on that, but definitely through the stuff I've seen, both through our employment data and the membership numbers, it's holding super strong.

WM: It looks as if the COVID pandemic is ramping up again. If we're about to experience anything close to what happened before, what lessons should we take from the first go-round to use in the second?

MC: From a socio-economic standpoint, we have enough stuff in general for people to live their lives. You think back to March 2020 when you couldn't get toilet paper or Clorox wipes, we weren't out of that stuff and there was no need for people to stock up on it. So, one, as a country, everybody kind of keep calm - that's why we put the sign on the side of the building, Keep Calm and Keep Trucking. You've got to stay calm even if times are tough. I'm proud of trucking and the way we responded as an industry.

I'm not an economist, but all the people I've talked to in our business, it can't be as bad as what was done the first time. The way the shutdowns worked were just haphazard, how we shut businesses down and commerce down, which, if you look back on it, didn't always align with public safety, which was the point. Hopefully, good government leaders learned a lot of lessons.

The feedback I got throughout the first wave of this was driver safety. It really wasn't the drivers that were the most at-risk because drivers are pretty isolated; it was really the in-office staff.

I think there's been a lot of lessons learned about how you keep what I call the infrastructure of what supports the trucks out on the road protected and diversified so you have layers of protection. I never really heard a tremendous problem with drivers getting COVID and that shutting operations down. When a wave would come through a city it did have a huge impact on the personnel that supports that driver out on the road that are so many times in an office environment.

WM: In addition to workforce development, two other issues that have that have been at the forefront of ATA focus are lawsuit abuse and the $2 billion I-10 bridge project in Mobile, where there seems to be a fight on how to fund it and largely at trucking"s expense. Can you restate the association"s position on both issues.

MC: Let's start with the I-10 project first. From Day One as an association our members have been engaged with all the stakeholders. They've had a number of hearings, we've spoken at all of them, we filed multi-page public comments that really outlined all of our concerns, but also the overwhelming sentiment that the trucking industry in Alabama is for constructing a bridge to alleviate congestion through the Wallace Tunnel in Mobile.

One hundred percent we're for finding a solution. We are willing to be part of the solution. We just don't want to pick up the whole tab. Government leaders have to know and I think they do know that we're a formidable force. We want to be mobilized to be an advocate for a fair solution rather than mobilized to be an opponent to something that"s unfair.

We're hosting a meeting in Mobile just for our members on Sept. 1. We're calling it a Town Hall, but it's really an intra-industry discussion so all the trucking stakeholders are educated about what's happened, what's happening currently and what are the different paths we could go down.

What I hope comes out of that is the people in the trucking industry around the state and region, but specifically for Mobile-Baldwin (counties), know what the situation is and they have the ability to contact (the various governmental agencies) and those officials hear from their constituents, which are truckers.

We're your advocate. We're on the same team. But don't put us on defense. We want what you want. We want to find a solution, and how many other people are going to come to you and say we're willing to be part of the solution. But don't make your friend the enemy. I feel good about where we are. It's a tough issue.

(On the lawsuit abuse issue) I don't want to say Alabama is the poster child and it's been a little quiet throughout COVID, but we've got to make sure we have a fair shake in the legal system, whether it be liability laws, workers comp, on down the line.

There are those who try to abuse that system; some attorneys who try to abuse the system to target our industry. We're not trying to go to war over that, but we want to make sure people understand we're a respected industry that employs 112,000 people in the state.

There's a legal system that hopefully is fair to adjudicate any kind of legal issue that happens, but we don't need to be the target of salacious advertising using the legal system to just make money for attorneys.

The main photo shows the recently installed sign on the Alabama Trucking Association administrative offices facing I-85 in Montgomery. The lighted sign was such an important project for the ATA, president Mark Colson was on the property through the wee hours of the morning during its installation.