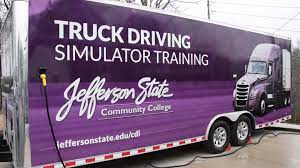 ‘We want to teach them to be real truck drivers. We want you leave with what you came for.’ - Alex Blevins, Jefferson State

Alex Blevins was making the rounds at the Alabama Truck Driving Championship in May, talking to every driver, company executive and administrator that would give him the time. 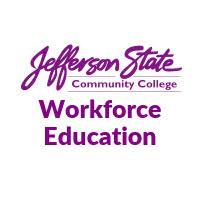 A bear of a man, Blevins is always glad to talk about the programs offered at Jefferson State Community College where he’s the training coordinator of workforce education, but his latest endeavor hits particularly close to home. As a former truck driver, he couldn’t be happier to pitch the school’s new CDL training program to an audience that would appreciate it most.

The Jeff State CDL Program kicks off Aug. 22 with the goal of having graduates immediately prepared to enter the workforce. Blevins had hoped to start instruction July 18, but a particularly rainy Alabama spring delayed the completion of a ¾-mile round training track on the school’s up-from-scratch 10-acre training facility off I-65 in the shadow of Chilton County’s Big Peach.

“They have a lot more programs, but for them to bring in a much-needed training United States-wide is really going to put Jeff State above and beyond on the map,” Blevins said. “People are going to be talking about Jeff State and how far they have come with this program.

“We have so many politicians who want to see this as well. Some of the trucking industry has been saying I’m so glad they have this around here in our area. I get calls every day.”

The eight-week program combines classwork instruction and 25-30 hours of behind-the-wheel training under the instruction of Richard Shirley and Darin Hill, two former owner-operators with more than 60 years of combined driving experience.

Blevins, a driver for 18½ years before coming to the college, won’t be teaching a class, but quickly added “I don’t mind rolling my sleeves up and getting out there, now.”

The program will have four trucks, two on order and due by the end of the month and two on loan from Trenholm State CC in Montgomery. Three of the trucks will have standard transmissions and the other an automatic. There also are two simulators available.

It’s not just a program to teach CDL and truck driving theory. The goal is to give its graduates the practical tools to immediately hit the road after the unique orientation of individual trucking companies.

“We want to teach them to be real truck drivers,” Blevins said. “One of the questions we ask is once you get your license what are your plans? We want them to come into the industry as drivers, not just get a CDL; we want them to fulfill that need. We want you to leave with what you came for.”

Jeff State is the latest institution to embrace the Alabama Trucking Association’s workforce development initiative, a program aimed to “relentlessly pursue” solutions to recruit and retain qualified truck drivers on behalf of its membership.

To that end, the ATA has partnered with numerous community colleges and industry stakeholders around the state to increase awareness of the issue and get the ball rolling.

Blevins said ATA president Mark Colson and vice president of safety and compliance Tim Frazier have been “big fans” of the program.

“They are a great partner and Alex is doing special things there,” Colson said. “All of the community colleges are supportive of what we are trying to do, from the system level to the individual colleges.

“We’ve not expanded our reach to market in all of their markets to date, but that is a goal long term to have a statewide marketing campaign that compliments all of the training programs in the state. We are taking it in phases and of course we have to raise funds to support this along the way.”

The Jeff State program is grant-scholarship funded, so the first 48 students accepted will be admitted free. Nearly 300 applications have been submitted for the four classes of 12, to be screened by an admissions committee. At the end of the first eight weeks, another round of applications will be sought.

“It has really blown my mind,” Blevins said of the response. “It tells you the need for us to have this program.”

Ohio CDL School Suspends Operation
The global pandemic may seem to be coming to an end for many, but TDDS Technical Institute in Lake Milton, Ohio, is still feeling the effects and has been forced to close as a result. CEO and owner Rick Rathburn, Jr. attributes most of the personnel...
TCA Announces Scholarship Winners
College students with connections to several HireMaster clients were among the more than 50 recipients of Truckload Carriers Association scholarships announced Thursday. The TCA awarded 52 undergraduate college students for the 2020-21 academ...
Garrett first winner of TLD scholarship
Grandson of TLD driver heading to University of Mississippi to study psychologyBy Al MuskewitzWright Media Editor-in-ChiefAustin Garrett is about to start the second phase of his college education and TLD Logistics is helping to make the road easier...