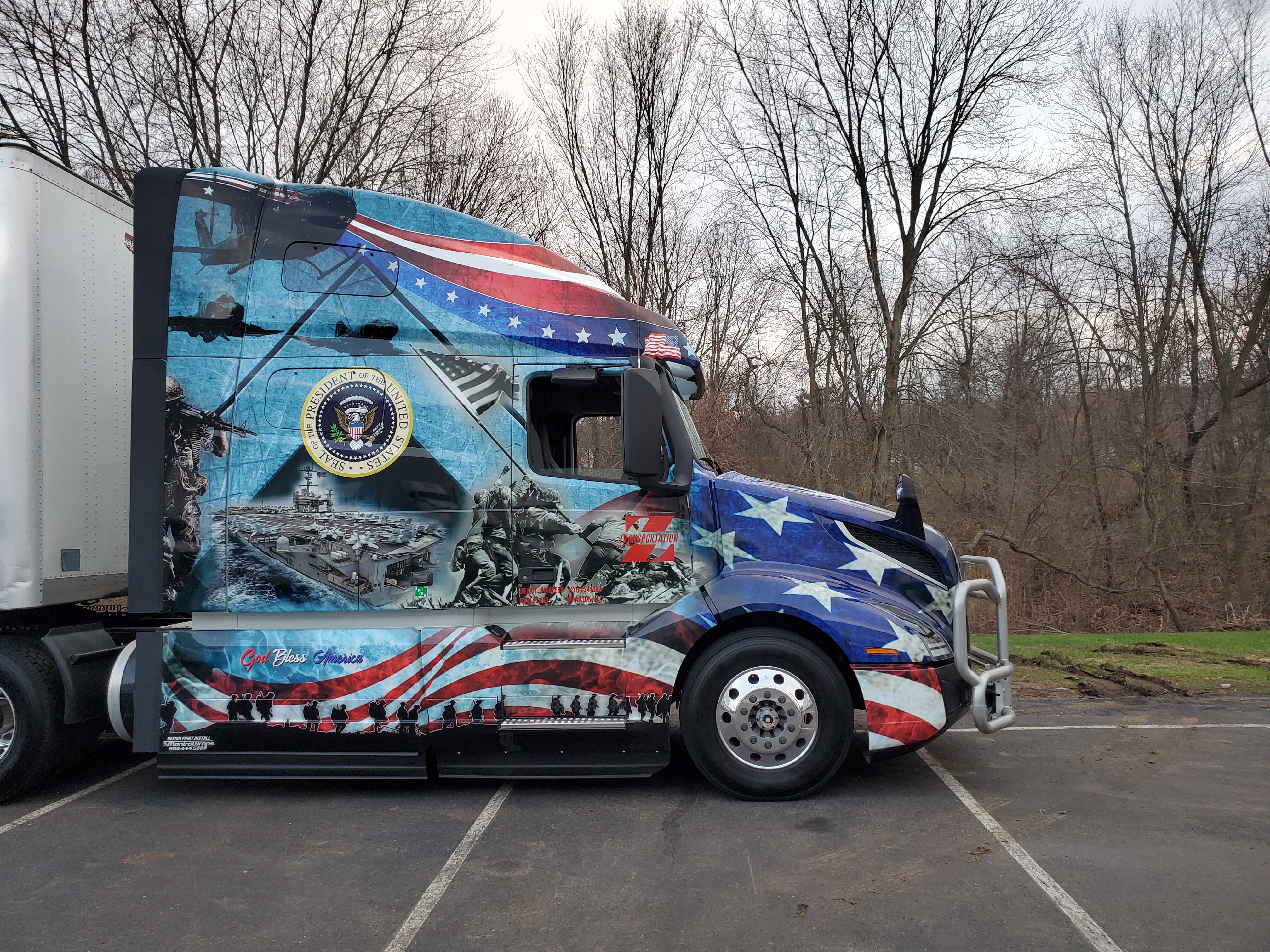 Willie Fulton was hanging out at the terminal one day when he got called into the office. It wasn’t like one of those called to the principal’s office kind of things. In fact, his managers at Z Transportation wanted his thoughts on truck designs because they were thinking of changing the profile of some of their trucks.

Fulton was happy to be included in the process, but that’s not out of the ordinary for the way Z does things. Over the next few months, he had kind of forgotten about it. Then around Christmas 2018, he got called to the office again and this time he learned what that brainstorming session was all about.

The managers sent him out to get his truck from the yard. When he got there, they surprised him with a new Volvo 860 sporting a stylish military-themed wrap honoring the South Carolina National Guardsman’s service to his country and all those who have served in the nation’s Armed Services.

“Just paying our respect to the saviors of our country,” Z Transportation owner Trajce Ristovski explained.

Veterans have always been a valued asset at Z Transportation and it’s reflected in its roster of drivers. About 20 percent of the New Jersey-based carrier’s roughly 100 drivers are veterans representing all branches of the service.

Fulton, a 20-year driving veteran who serves in the South Carolina Guard’s 1052nd Transportation Unit, proudly drove his truck for the rest of the time he was with the company. He considered it an honor and responsibility.

“It’s not just a regular ol’ truck,” he said. “You already have to represent the company, that’s one thing, but when you’re representing the military on top of it, it makes a big difference. I knew people knew who I was. I’m not just this random guy who wanted to be a truck driver.”

The wrap depicts scenes representing all of the armed forces. The driver’s side panel is dominated by the silhouette of a soldier lifting a child and the Great Seal of the United States. On the passenger side, there’s an image of the flag-raising on Iwo Jima, planes on the flight deck of an aircraft carrier as well as flying in formation, troops marching in the field, and the seal of the President of the United States. The Stars and Stripes draped the bottom panels and across the hood.

The carrier added a second military-themed Volvo 860 in early 2019 and has plans to wrap one of its 20 new Peterbilt 579s later this summer.

“It was a great thing they did,” Fulton said. “There are so many of us that you’ll never know about. That truck represented everybody; it had the Navy, the Army, the Marines, the Air Force – everybody who was there."

The original truck was an instant hit and both of those in service continue to be popular whenever and wherever they’re seen on the road. And make no mistake, these aren’t just for show; they’re actually working in the field.

All of their drivers wanted to be in it, many remarking in the orientation they’ve seen it on Facebook or YouTube, but company policy states it has to be driven by a veteran with a clean driving record and at least one year OTR experience.

“Driving it down the road I got so many compliments; I took more pictures than I did driving half the time,” Fulton said. “People just pulling over at the truck stop, running to the fuel island and asking if they could take a picture of the truck, or me and the truck.

“I’d pull into Walmart or the mall to grab a few things and I’d just stand back and watch people stop and take pictures. It was amazing. Everybody was watching.”

Fulton even took the truck to his Guard unit and it got the VIP treatment.

“My sergeant major came down, my lieutenant colonel came down, the colonel came down, they all came and watched the truck,” he said. “The first time I took it home, we had this little pad where we had an armory tank they took away a long time ago, they said put it on the pad right in front. I left it there for a couple days and people stopped by. It was a big boost to everybody.”

Fulton drove the truck for a couple of years then left during the height of the pandemic but has stayed in the trucking industry. He hasn’t seen his old truck on the road yet, but he’s got his eye out for it.

“Eventually I will catch it,” he said. “I have no doubt.”

And that will be another proud day – for a lot of people.

Al Muskewitz is the editor at Wright Media.