News Home / Other News / TMC Announces Trainer of the Month 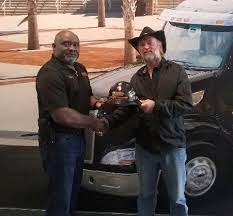 With over thirty years of driving experience, Charles Duncan still loves what he does. Seventeen of those years have been with TMC. TMC attempted to gain him as a driver trainer several years ago with such an excellent, long-standing driving record.

Charles finally agreed to be a driver trainer about three years after previously declining the offer. “I really enjoy the company of a new driver. I have so much experience I can teach them - things I wish were taught to me.”

The highlights of being a TMC driver for Charles are all the different sights along the road and meeting new people each day. “It’s fun to see how people live in different parts of the country.” When Charles has free time, he likes to kayak and go scuba diving.

Jeff Geist, Trainer Coordinator Manager, had this to say, “Charles has trained for almost three years. Over the last twelve months, he has had eight guys in his truck. The drivers he trains have been safe and are doing well, which is a testament to the quality of training Charles provides.
Charles says he is honest with his trainees and lets them get plenty of hands-on experience to demonstrate that they know how to do things correctly. Join me in congratulating Charles on this award.”

“I train in order to teach new drivers valuable skills. I don’t do it to make extra money,” says Charles. When asked what the most important thing he tells his trainees, he said, “Do your job. If you don’t make a scene and stay to yourself while working hard, it means you’re doing something right.”

TMC would like to congratulate Charles Duncan on this great accomplishment of being recognized as Trainer of the Month!

TMC Announces Trainer of the Month