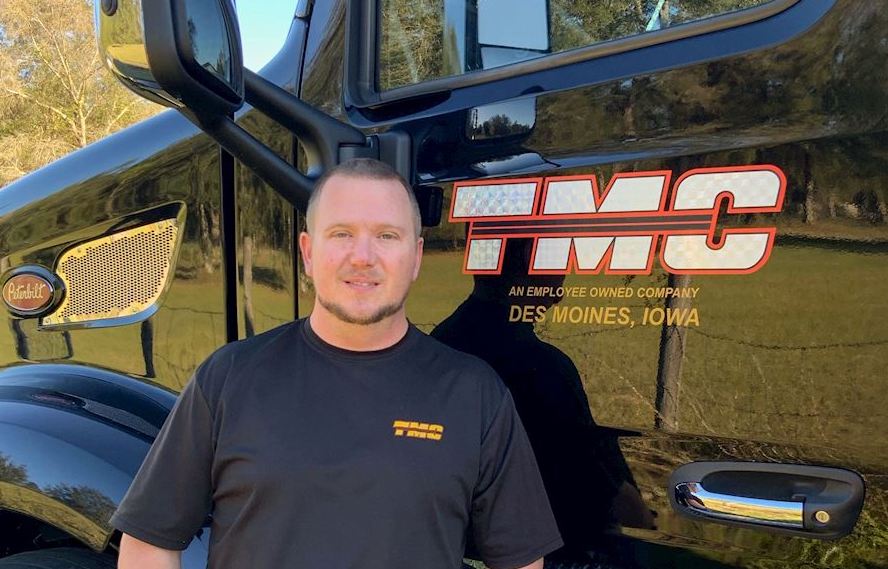 Known for his professionalism and excellent representation of TMC Transportation’s training standards, Matthew Nadeau has been named the company’s 2021 Trainer of the Year.

Of his 10 years of driving experience, Nadeau says he never expected to become a trainer, but he later decided he wanted to help his fellow drivers and share some of the knowledge he learned. And now he’s been a trainer for eight years.

He learned he had won the award while on vacation celebrating his 14th wedding anniversary.

“It’s definitely an honor to be named,” Nadeau said. “You know, it’s a big deal and it makes me feel like I am being recognized and like I am doing the right thing.”

Nadeau has always been about doing the right thing. He is on his way to surpass training nearly 90 TMC drivers while maintaining a stellar reputation as a solid and safe leader.

“Matt has taken on 88 training assignments to date and gives every person his all," Nadeau’s Fleet Manager, Taylor Yates, said. “He understands what it takes to succeed at TMC and does his best to instill these habits in his trainees so they can be successful on their own. He is a pleasure to work with, extremely patient, and possesses a strong work ethic.”

Nadeau said adjusting to the driver's lifestyle can be difficult. He notes that many of his trainees come from a variety of career backgrounds, but he does his best to provide them all structure and a bit of peace of mind.

“If this is a job they (trainees) want to do, I do everything in my power to help them along,” he said.

Nadeau believes leading with patience is the key to his success as a trainer. He says every trainee comes in with a different mindset, so he tries to convey patience and lets them know they can leave training successfully if they put their mind to it.

He quickly points out, however, his responsibility as a trainer doesn’t end when drivers land their own set of keys.

“I want to set them on the right path from the beginning,” he said. “Let them know you are here for them and you have their back if they need it. I tell all my guys even when you are on your own and you’re just not sure about something, whether they call me, training or safety, somebody is always here to help them. They are never truly on their own.”

That sentiment rolls over to his personal life, as well, and notes he maintains friendships with some trainees out on the road and at home.

He recalled a time when a hurricane once caused a former trainee to lose power. He invited the driver and his daughter to stay with his family at his Florida home. The night ended with grilling steaks and what he described as a great time.

“Matt is patient and always willing to help out in any way he can,” TMC training coordinator manager Jeff Geist said. “He has a strong work ethic and focuses on training drivers for success and safety. Matt has definitely earned this award over the course of the last eight years of training.”

ATA Honors Drivers, Professionals of the Year
The Alabama Trucking Association recognized its Driver of the Year Monday night at its annual Fleet Safety Awards banquet and both the winner and runner-up come from the same carrier –Blair Logistics.The ATA Driver of the Year is William Brown ...
Hiremaster Expands Presence at MATS
Visit the Hiremaster Booth (67072) in the West Wing at MATS By Al MuskewitzAs the country and its truckers continue to come out of the COVID-19 pandemic and the demand for drivers resumes, Hiremaster is poised to meet the need by enhancing its posit...
Empire Express Rolling Out Largest Pay Increase
Empire Express, a Memphis, Tenn.-based carrier dedicated to delivering its no-touch freight in a safe and timely manner, is now offering its drivers the largest pay increase in company history.Starting April 1, Empire OTR drivers will earn between 55...